The Planting of the Coronation Oak at Leckhampton 1902

Recently advertised for sale on eBay was a miniature silver spade which commemorated the planting of an oak tree at Leckhampton on the occasion of Edward VII's coronation. It was 20.5cm long and weighed 77grams – see photo. The English hallmarks indicated that it was made by Thomas Latham & Ernest Morton of Birmingham. I felt that the only resting place for this unique object should be in Cheltenham and – to cut a long story short – obtained it on behalf of the Museum, where it will in due course be on display in the new Local History Gallery.

Leckhampton celebrated the Coronation of King Edward VII, on 9 August 1902, in grand style. Following a church service at noon, a dinner was served in the Parish Hall to all parishioners of the same age as the King and upwards (ie 60 and over). Then there were games for younger folk in the school field and at 4.30 pm all children up to the age of 16 residing in or attending any of the schools in the parish sat down  to a ‘meat tea’. The climax came at 6.30 pm, when Mrs G B Witts performed the ceremonial planting of ‘The King’s Oak’ in front of Leckhampton Parish Hall.

This event is captured in the other accompanying photo (taken from the Leckhampton Local History Society’s archive), which shows Mrs Witts in the act of covering the roots of the tree with soil. To commemorate the occasion, she was presented with the small solid silver replica of the spade, suitably inscribed. Regrettably the tree did not survive long, though this is not surprising, given its position close to the pavement and the hall itself. However, as indicated above, the silver spade fortunately did survive. 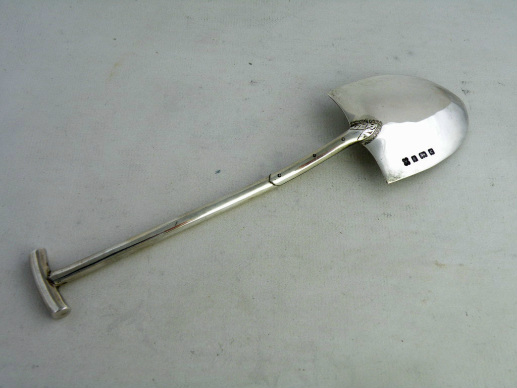 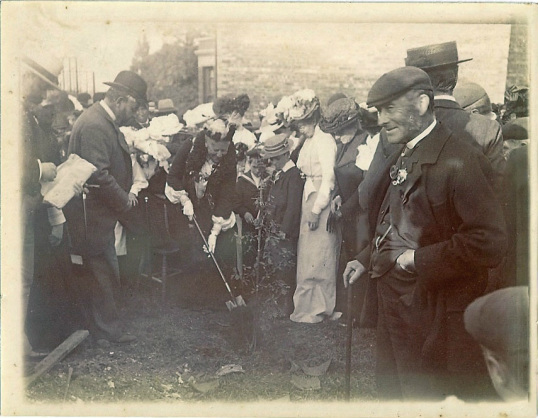 Mrs Witts was the wife of George Backhouse Witts, who had been Chairman of the Leckhampton Local Board until Leckhampton was incorporated into Cheltenham in 1894, and he remained an influential figure in the village. For example, he later led the defence of the ‘Leckhampton Stalwarts’ who had protested against the enclosure of Leckhampton Hill. He kept the relevant correspondence in a metal box, marked ‘Leckhampton Hill Papers’, and some years ago I was able to acquire this box from the estate of the late Jean Bendall. Appropriately, it now houses the Local History Society’s ‘Bendall Archive’. 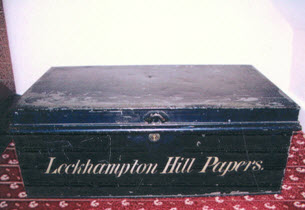 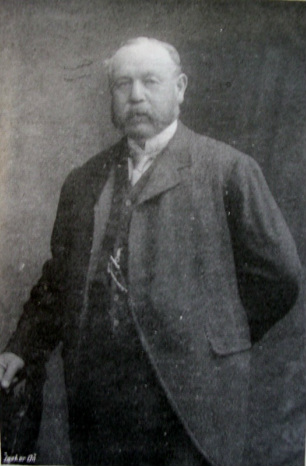 George Backhouse Witts
G B Witts was the grandson of the Reverend Francis Witts, of Upper Slaughter, who is known today for his Diary of a Cotswold Parson. He was a man of many talents: a Justice of the Peace and County Councillor; a chartered engineer, in charge of the construction of the Bourton-on-the-Water to Cheltenham Railway; an amateur archaeologist, discovering and writing about many prehistoric remains in the county; a Lieutenant in the Gloucestershire Rifle Volunteers; Honorary Secretary of the Cotswold Hunt; a dedicated member of the congregation at Leckhampton Church; a member of the Ancient Order of Foresters; and an entertaining speaker, who after giving a talk on ‘Leckhampton and the Neighbouring Hills’ would finish by singing a selection of Gloucestershire ballads, such as ‘The stwuns that built George Ridley’s oven’.